In the beginning of 2015, Wind Aan de Stroom started the construction of the largest Belgian onshore windfarm. Several sites within and around the Antwerp harbour area will house state-of-the-art wind turbines that are able to produce 100GWh per year once installed, providing power to 30.000 house-holds. This project is led by ‘Wind Aan De Stroom’, a consortium of both port authorities and private investors. Vleemo and Aspiravi, which are known wind farm developers within the industry, are also part of the consortium.

For the first phase of the project, 15 wind turbines have been erected and commissioned by the end of 2015 this year. Siemens Wind Power was chosen as both the supplier and contractor for the installation process of the wind turbine types SWT-3.0-113 and SWT-3.0-101 which are foreseen by the latest technology to cope with the potential risk of icing during winter season.

Icing risk in Belgium compared to severe icing in the North

In specific ambient conditions ice may be formed and build-up on the rotor blades of wind turbines. Icing not only can occurs in so called ‘cold climate’ locations, also moderate climates can have certain climatic conditions which increase the risk of having a certain type of ice built-up on the rotor blades. Different types of atmospheric icing can occur depending on these ambient conditions: rime ice, glaze ice caused by freezing rain, wet snow etc... In general these types of icing occur in a temperature range of +3°C and -6°C, so not only cold climate sites need to be assessed for the risk of icing.

As wind turbines are designed for worldwide locations, the OEM’s take measures to reduce the risks and effects of icing as they can lead to a reduced energy yield, increased component fatigue loading, a risk for ice throw and increased noise emissions. For regions in the North where icing in winter season occurs often and the amount of icing is high developers and operators pay much attention in developing solutions for this problem.

Within the research work of IEA task 19, in which Belgium is participating represented by Sirris/OWI-Lab, the risks and associated potential production losses have been evaluated for different locations worldwide.

The figure below gives an overview of the different IEA ice classes and the associated production loss average. Based on the location of the wind turbine such losses are in the range of less than 0.5% and more than 20% of the annual energy production for some sites. This ice classification was based on research over several years and different locations worldwide.

With respect to Belgium the risk and occurrence of icing is low compared to countries in the North as Canada, Austria, Finland or Sweden for example. Also the effect of icing on production levels are minimal in our regions. Still, operators take the potential occurrence of icing into account as wind turbines are designed to operate for a lifetime of 20 years. In such a timeframe the mathematical possibility exists to have certain ambient conditions that create a certain type of ice. Belgian operators therefore take preventive measures to mitigate such risk.

The development of new ice detection and ice prevention systems is currently a hot R&D item in the wind power business, certainly for cold climate sites in the North where the risk of having severe icing is much higher. Also sites with a low risk of icing introduce similar technology as an additional safety feature. With respect to Wind aan de Stroom, the wind turbines are located on and around production sites, quaysides and warehouses. The increased risk of personal or material damage had to be taken into account. Therefore special attention was paid towards the ice detection and de-icing systems.

On top of an ice monitoring system based on power curve, there are furthermore two additional independent ice monitoring systems implemented based on a direct ice measurement and the other on vibration monitoring. Also a de-icing system is implemented when ice would occur to mitigate further risks. If icing events are measured, the wind turbine stops and a de-icing system can be activated to melt off the ice in a controlled and safe way. The heating system is embedded in the blade structure and the control strategy was specially designed by Siemens for this project.

Validation of blade de-icing system by OWI-Lab on site

In order to check the functionality of the blade de-icing system, an additional on-site validation test campaign has been performed at the end of last year, supported by OWI-Lab in order to ensure its performance after installation. OWI-Lab provided field measurements for this validation campaign by performing thermal imaging on site during the commission phase. Two separate infrared measurement systems were used to ensure the accuracy of the measurements. A fixed camera in a weatherproof housing provided an overview which could be checked by the project developer and OEM while a dedicatedhandheld camera was used to provide more detailed images. 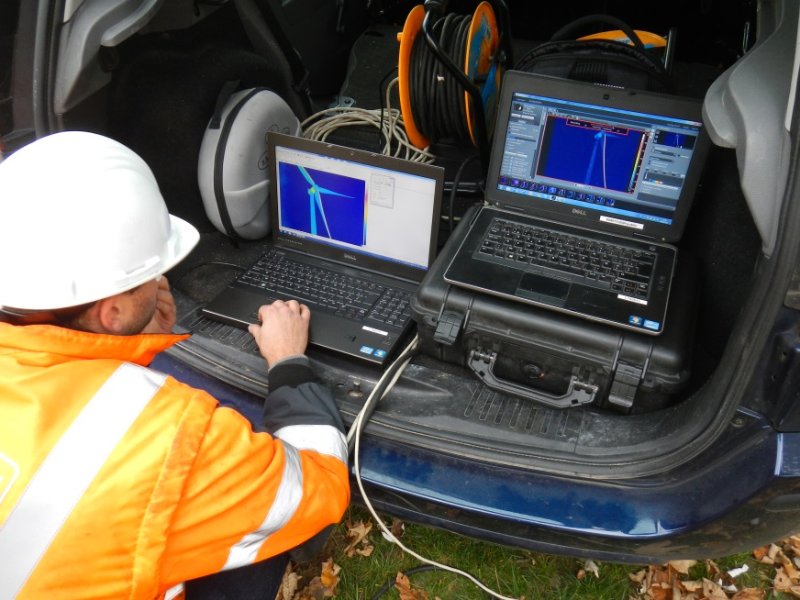 Important areas within the IR-images where marked during the test to extract raw data and the needed graphs for the reporting to our customer. The figure below show an example of the infrared images and the temperature tracking of certain areas of interest within the area of the images, clearly showing the correct working of the blade de-icing system.

OWI-Lab, the research, development and innovation platform for wind energy in Belgium, supported the project of Wind aan de Stroom with its advanced monitoring tools for these field measurements. Apart from research and validation measurement campaigns, the lab also houses a large climatic test chamber in the port area in which it tests wind turbine equipment for cold climates and icing events. Leading wind turbine component suppliers test their products like gearboxes, generators, converters, transformers, etc.. for temperatures even below -40°C to ensure safe and reliable operations in worldwide locations. Also icing tests are currently performed in the lab to test and evaluate new developed de-icing and anti-icing systems before they are used in the field. By facilitating such validation campaigns the lab contributes in the continuous research and development that is taking place in the wind power industry.